We’re often focusing on the mechanics of Anno 1800, talking about features, new buildings and (of course) items. At the same time, because of the popularity of ornaments and the number of screenshots all of you are taking, we know many of you also care for the little details of the Anno world.

Today, we want to dive into different kinds of details when we talk with Lotta, one of our Game Writers, about the work of the Narrative Team and bringing the world of Anno 1800 to life.

In broad strokes, what kind of tasks is the Narrative Team responsible for?

The Narrative team is split into two roles: Narrative Designers and Game Writers.

Roughly, Narrative Designers focus on creating the broad narrative structure (the setting, the plot, the questlines) and then implement these structures within the game: How and when a quest is triggered, what gameplay aspects are involved, what art assets are needed etc.

But very often the team comes up with story ideas together. Especially at the start of a new project or a DLC, ideas are shared and expanded upon through research and discussions.

Once everything is written, some of the texts need to be recorded. This is also something the team is involved in. They work together with a recording studio and the actors to bring the characters to life.
And finally, Game Writers are also involved in the localization/translation process: They communicate with the localization team, give feedback if there are any questions and check the final edit.

Part of your job also is research for new DLCs. Can you tell us a bit about the process?

Research is a big part of Anno.

Once the focus for a DLC is agreed upon – like the skyscrapers in the high life DLC – we start focusing our research on the specific setting, timeframe, building type etc. In the case of “The High Life”, our focus was the late 19th/early 20th Century in America. Specifically, the construction of early skyscrapers, the rise of department stores and the history of patent products.

But the Narrative Team is by no means the only department conducting research. The Game Design Team, for example, is also very research-focused. This is important to ground goods, buildings, and new mechanics in a historical context. At this stage, a lot of the research gets shared between the teams, and we discuss how to best use all the information we gather in-game.

(But other departments also do research, the art team for example. Different places in specific time periods have very distinct looks. The architecture, the fashion, etc. So, it is important to gather references.)

How do you go about making the world come to life?

It is always fun to find little details, anecdotes and stories during our research and then still try to sneak them into the game. While the big picture is important, it is in some way the accumulation of details that really gives a game setting depth and makes it come alive.

This of course can be done through easter eggs but also in item fluff texts, quest names, characters etc. Little historical anecdotes are often hidden in Anno 1800, references to old games or little details that try and capture the Zeitgeist of the setting.

One of those are the hidden detective scenes in the “The High Life” DLC.

Then let’s talk about just that. What are these scenes, where can players find them?

Once the Skyline tower is built two people can be found atop a balcony, sitting by a chessboard, enjoying a drink and a conversation. They are the two protagonists of a mysterious easter egg. One is a 1920’s Noir Detective, dressed in a dapper suit and a hat. And the other is his confidant and close friend, the drag queen – dressed in ruby red. Just get close to the tower to experience one of their conversations – they happen in random intervals. 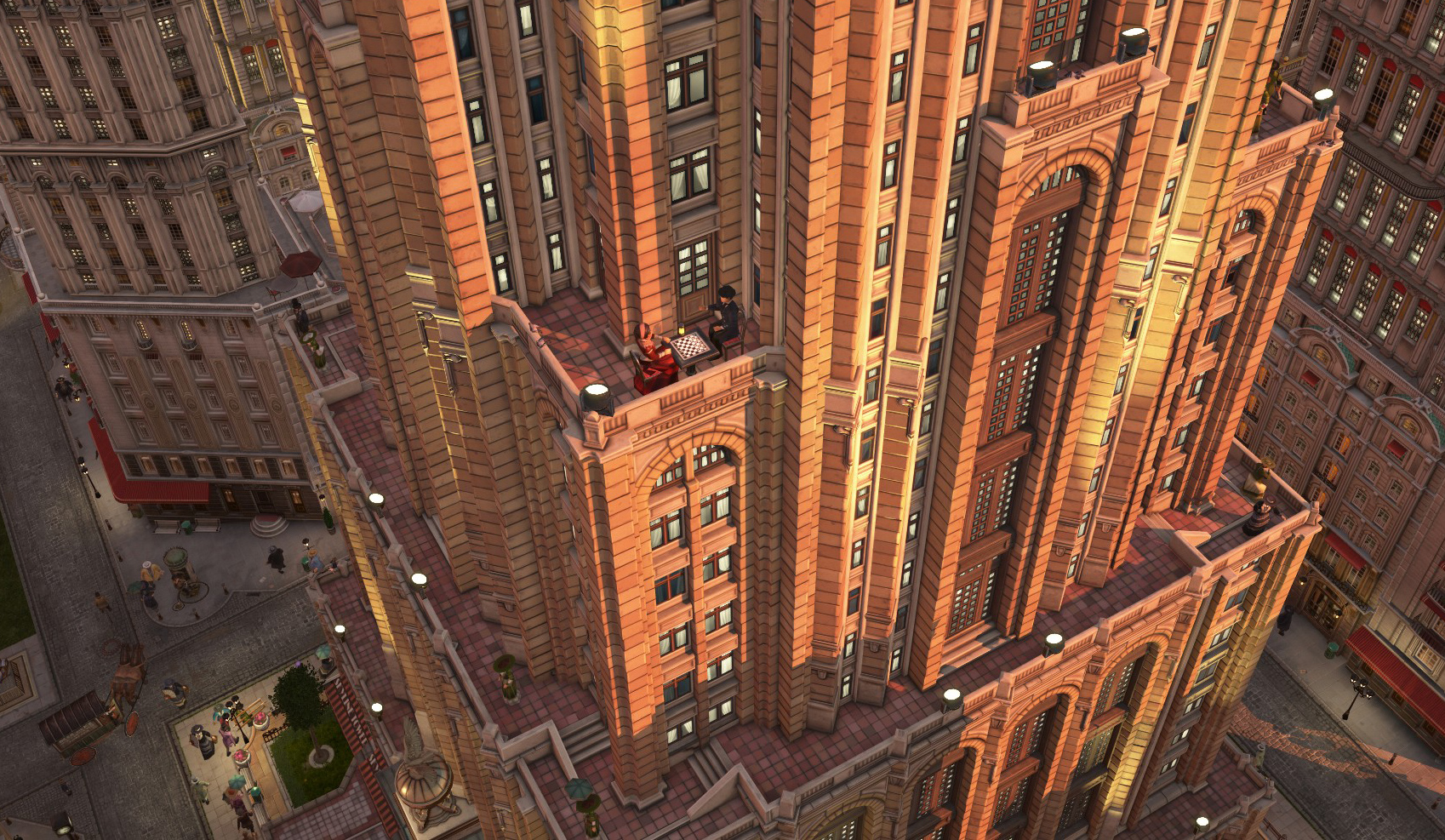 About the two characters

He is the classical 1920’s hard-boiled noir detective who’s seen a little too much in his line of work. He started his career of snooping as a journalist but got tired of printing rumors and lies and turned to the pursuit of truth instead. Although the dead rarely pay.
He cares for the people and their stories, but that makes it all the more difficult. To deal with it all he likes to take to the rooftops of the city after a case, where he meets with his friend and confidant the Drag Queen.

She knows the city and its people just as well as the detective, if not better. When he tells her of his cases, she can picture it all: the faces, the scenery, the consequences… She’s a good listener and probably the only one the detective has got. But she’s not just there out of the kindness of her heart she likes the stories too, she likes the mystery that unravels thought a conversation.

Whenever our Detective has closed one of his grueling cases, he goes to this balcony atop the Skyline Tower to meet his friend. There he reflects on the events of the case, his client, the clues he found, and of course the outcome. The drag queen always has an open ear for him, curious to know the reveal, ready with a bit of advice, and a sympathetic smile.

In total, there are ten different cases you can overhear.

As you know “The High Life” is heavily inspired by the American skyscraper boom at the end of the 19th and beginning of the 20th century. To strengthen the atmosphere of that setting we choose to include another American staple from around that time: The noir detective genre.
Noir stories were first published in so-called pulp magazines. Among the many heroes of these stories, the 1920’s hard-boiled noir detective might be the most famous. He is a complicated antihero, a broody, pessimistic private investigator who’s seen a little too much in his line of work but still cares enough to take on case after case. Despite his air of indifference, he always gets invested and when his cases reveal a tragic tale – which they often do – he drowns his sorrows in a stiff drink.

The most famous of his kind must be Raymond Chandler’s Philip Marlow.

Have you already encountered one of their scenes? If not, find below one of the ten conversations to listen to – and make sure to check out the others in-game!

That was a short look into the work of a Game Writer on Anno 1800. Do you want to know more about their everyday tasks? Curious about details on the work of the Narrative Designers? Let us know what you want to learn more about!