October surely is all about Anno 1800, with not only the release of “Land of Lions” for your PC, but also a physical version of the game for your table: Yes, this month will see the release of the Anno 1800 board game!

Designed by Martin Wallace and published by KOSMOS, Anno 1800 – The Board Game let’s build up your industry, fulfill your people’s needs and settle new islands. Similar to the PC game, you’ll need to manage your workforce, produce the right goods and can trade with other players for resources you urgently need. 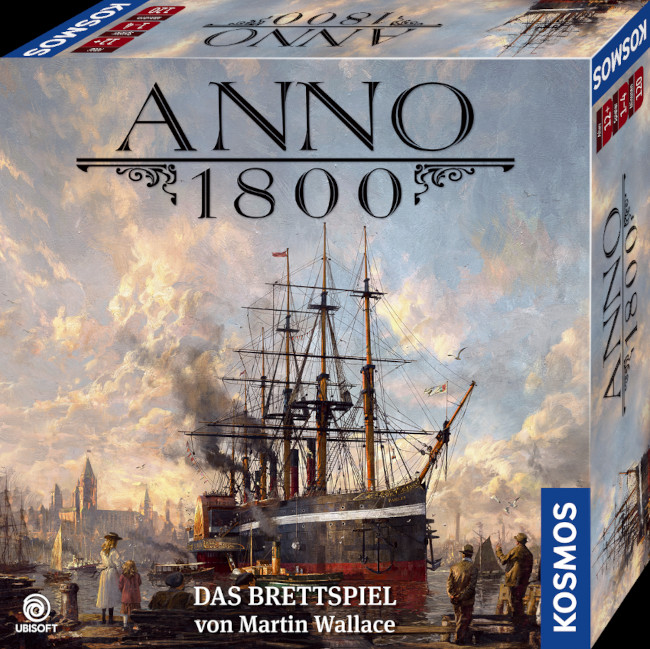 To give you a bit more background on the development of and the ideas behind the game, we approached Martin Wallace with several questions. Enjoy the interview below!

Hello Martin, before we start with the game-related questions, could you tell us a bit about yourself?

I have been designing games for nearly thirty years now, self-publishing my first game, Lords of Creation, in 1993. Since then I have designed games for other companies or published through my own companies, which were Warfrog then Treefrog. Some of my designs have become well-known, such as Brass, Age of Steam and Discworld: Ankh Morpork. My wife and I emigrated to Australia in 2017 and now live north of Brisbane, on the Sunshine Coast.

How much time did you spend with the Anno 1800 video game before starting to work on the board game?

To be honest I never played the game as I never play video games. I got a friend of mine to play the game extensively and then gained the necessary information from him. As he is also a board game designer, he had a good idea of what details would be useful to understand.

Did you work on board games based on video games before?

I have worked on a couple of other games based on video games, but none have been published yet.

Do you think there are there aspects in game design for both types of games which are comparable and where game designers could learn from the respective other type?

It’s easier converting a video game into a board game than something like a film or book as you are already dealing with something that has game-like properties. However, video games and board games are very different beasts. In a video game all of the rules and economics are hidden beneath the surface, which allows for as much complexity as you want. With a board game everything is on view, which means you have to keep things as simple as possible. I think video game designers do not have to worry about elegance or simplicity as they are not constrained by those factors. For me this makes video games feel very loose. In a board game you can often to see the connections between a decision and a consequence later on, whereas in a video game you are making many micro-decisions and are not always aware of the long-term impact of them.

When translating features of the Anno 1800 video game to the board game, which aspects did you find the most challenging?

The main issue was the number of different resources available. Normally you would have to physically represent these with counters, which would have been a mess. Fortunately, this challenge forced me to come up with a simple solution, which is to have the resources represented by factories and have them produce only when you place a worker of the correct colour on them. This simple mechanic drives the whole game.

How are the city-building and economy aspects the Anno series is so well-known for reflected in the boardgame?

Anno 1800 is largely about production chains, where you have to go through a number of steps to get the resource you desire. Although I had to chop out a lot of the different resource types for the board game I think enough remain for there to be a close connection with the original video game. You gain a sense of city building as you add factories to your island display. To gain more building land you have to discover islands. These elements are handled in a very simple manner but still reflect the actions within the original game. The only major element not represented is warfare, which would not be suitable in a highly deterministic economic game.

For which aspects of the game did you work together closely with the development team in Mainz and where did you take a bit more creative freedom?

As I’m based in Australia it was not easy to work closely with the development team. My first aim was to come up with something that worked as a board game. We had a very productive meeting at the Spiel show in Essen where we discussed what elements were still not represented well. From that I came up with a simple mechanism of having objective and rule change cards to include these missing bits. This added a lot to the game play. However, at all times my focus was on making sure the game worked as a board game. If there were certain parts of the game that could not be included easily then I ignored them. Overall, I would say I had a lot of creative freedom.

The Anno 1800 boardgame seems to be not focused on direct players vs player actions, e.g. destroying other players’ ships or buildings. Which elements anyway add to the competitiveness of the game and which interactions between the players are possible, be it competitive or cooperative?

If I had included the option to attack other players then the game would have become a wargame, which would not have the same appeal. In a long video game, you do not mind setbacks due to warfare. In a board game lasting two hours you do not want to suffer setbacks due to the actions of other players. Thus, direct warfare was removed from the game. Interactions between players are mainly through trade, where you can gain a resource from another player. In this case both parties gain, so it does not feel like you are stealing a resource from somebody. There is also some interaction in trying to achieve certain objectives before other players. These vary from game to game. As some are based on gaining factories and there are only a limited number of each then you have to decide which ones you wish to compete for. Overall, the level of interaction is pretty gentle, not quite solitaire, but you can get on with your own plans without worrying too much about other players.

You have previously worked on other industrial era games like Brass: Birmingham. What fascinates you about the setting and how do you ensure your games play differently?

Brass Birmingham and Lancashire came about because I used to live in that part of the world and so had some knowledge of the history. For me the challenge with these games is to create a realistic feel for how different industries interact. With these games variety grows from the random allocation of cards, plus random markets in Brass Birmingham. For Anno 1800 the variety comes from the objective and rule change cards. These are known at the beginning of the game and players have to adapt their strategy to them.

Thank you very much for the interview, Martin!