Hey Anno Community,
Given the current global situation, it should come as no surprise that the annual gamescom gaming convention that traditionally takes place in Cologne, Germany every August is moving to a completely digital format this year. As gamescom is always a great opportunity for us on the Anno Team to meet and talk to our fans, we did the next best thing to an in-person meet & greet, and participated in a (German) live stream today, during which we not only answered some questions, but also presented many of the great quality-of-life improvements coming with Game Update 9 (which will release alongside the “Land of Lions” DLC this October). Let’s take a look, shall we?

From the beginning of Anno 1800’s post-launch, it was always important to us that any of our major DLCs (so anything game-affecting that is part of one of our Season Passes) should always be accompanied by a free Game Update that should have some new features and improvements for all players of Anno 1800. We know that not everyone buys new DLC straight away (though in this writer’s unbiased opinion you definitely should consider doing so!), and we don’t want anyone to feel left out- the release of a new DLC and major Game Update should always be an exciting occasion for everyone in the Anno community.

If you have been with us from the start, you will recall that some of our previous free Game Updates had a headlining new feature, such as the day-and-night cycle in GU 5, or GU 6’s statistics overview. For Game Update 9, we decided against a big new feature, and instead wanted to focus on making it easier to manage and enjoy all the content that is already available inside the game. To this end, we spent a lot of time sifting through countless comments and suggestions from the community to identify some of your most requested quality-of-life improvements, ranging from trade ships to the newspaper and visitors. We hope you will enjoy the ones we decided to focus on! 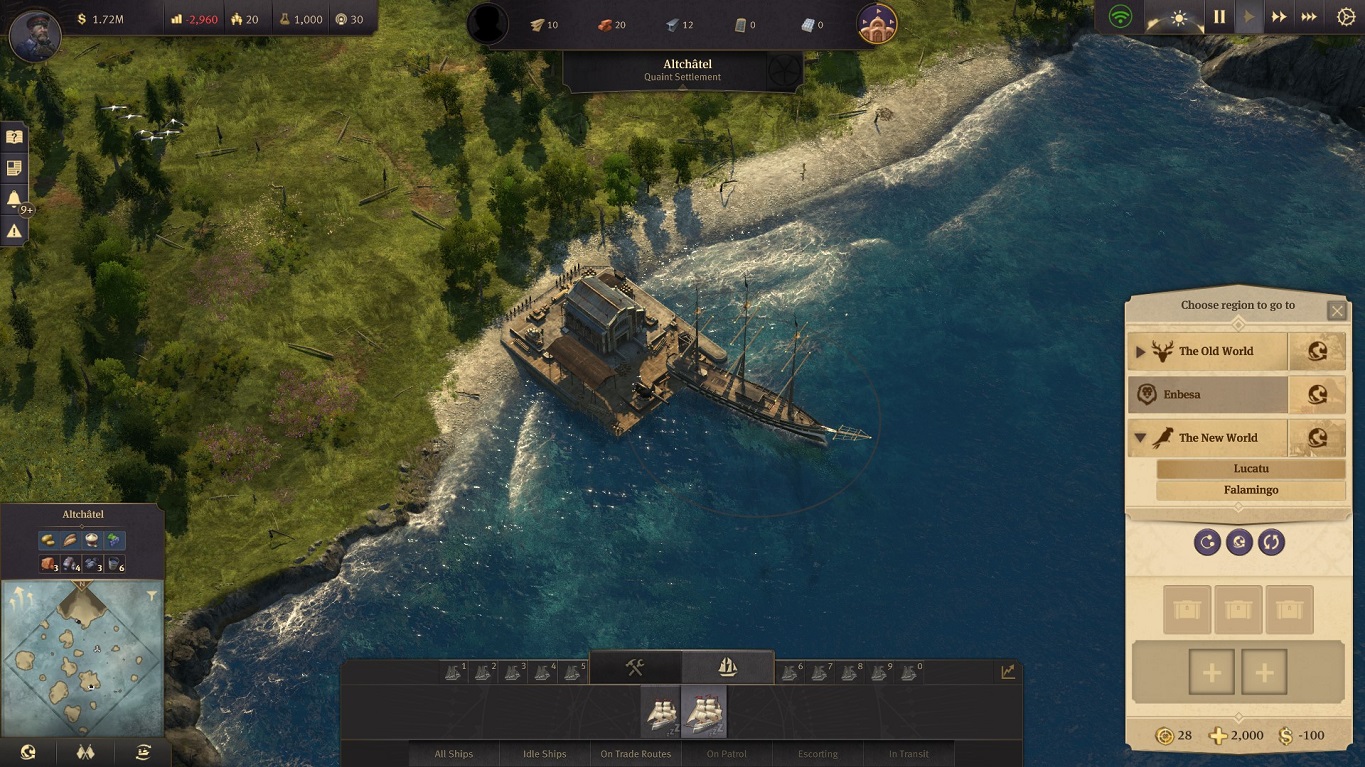 Making an Admiral’s life easier
Let us start with a big one that many of you have been asking for: Starting with Game Update 9, you will be able to designate a specific harbor as the destination for any ships sailing between sessions. When clicking on the button to send a ship to another session, the menu popping up will now show you a list of all sessions and islands you own inside them (sorted the same way as in the statistics overview). Once ordered, the ship will travel to the new session and island and go into an idle state once it reaches its destination.

Speaking of ships: While you are in the trade route menu, you can now CTRL + click on any ship to jump right to it in the game world. This can be done both from the ship list, or the map.

Of course, any Anno player can attest that sometimes things do not go to plan with your ships. In the future, a ship lost at sea will leave a “lost ship” marker in the trade route menu, which you can click on to assign a new ship to the route. May Poseidon smile upon them more than the last crew…

There are also newly improved notifications related to your ships and fleets, as they will now mention the name and type of ship entering a region (e.g. “The Battlecruiser Raven has entered the region” or being destroyed. Helpfully, this notification will also specify the trade route the destroyed ship was currently on (if applicable).

But we also have improvements for those of your ships that have not been lost (yet)! You can now hover over a ship in the trade route menu to see it’s current cargo, as well as any equipped items on it, which should make it easier to find the most suitable candidates for any new routes you are planning.

Finally, we are speeding up the unloading of ships near your own harbors, as you can just CTRL + click on any cargo they have to fully transfer it to the harbor, bypassing the usual active trade menu in the process. 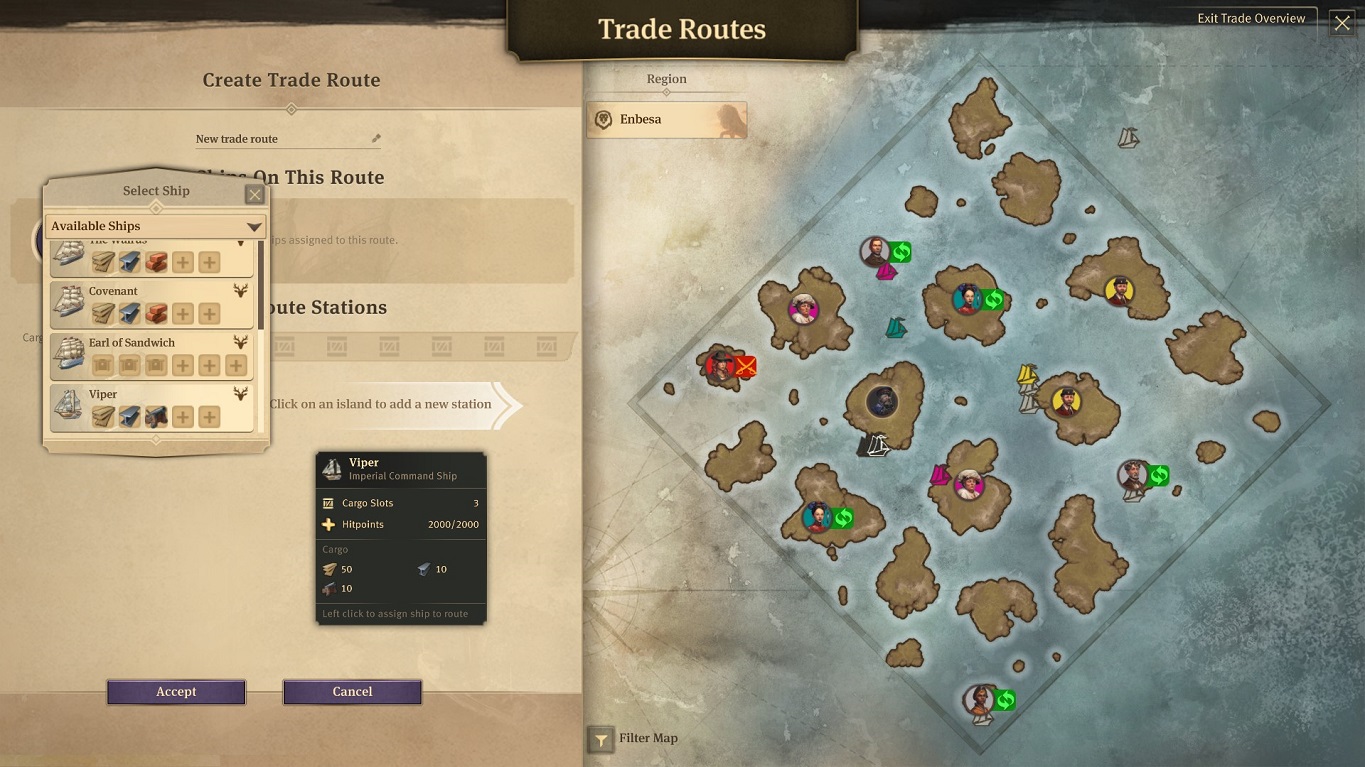 Let’s talk items
While the fast unloading only works at your own harbors, Game Update 9 will give you another good reason to frequently check out the islands of other characters, as we have cleaned up and reworked the item trading pools for all of them. This should make it easier for you to reliably get the items you want from the appropriate character.

Another new improvement aimed at giving you more control over the items you earn is the World Fair, where you will now be able to select the reward box you receive from among all unlocked reward tiers (for example, if you unlocked tier four, then you can pick between the first, second, third and fourth box).

Of course, things can get a bit overwhelming when you buy a lot of items. To make things easier, we are adding the same item search functionality from the harbor object menu to all buildings that you can socket items into! This will make it faster and more straightforward to find the items you want in the right building. 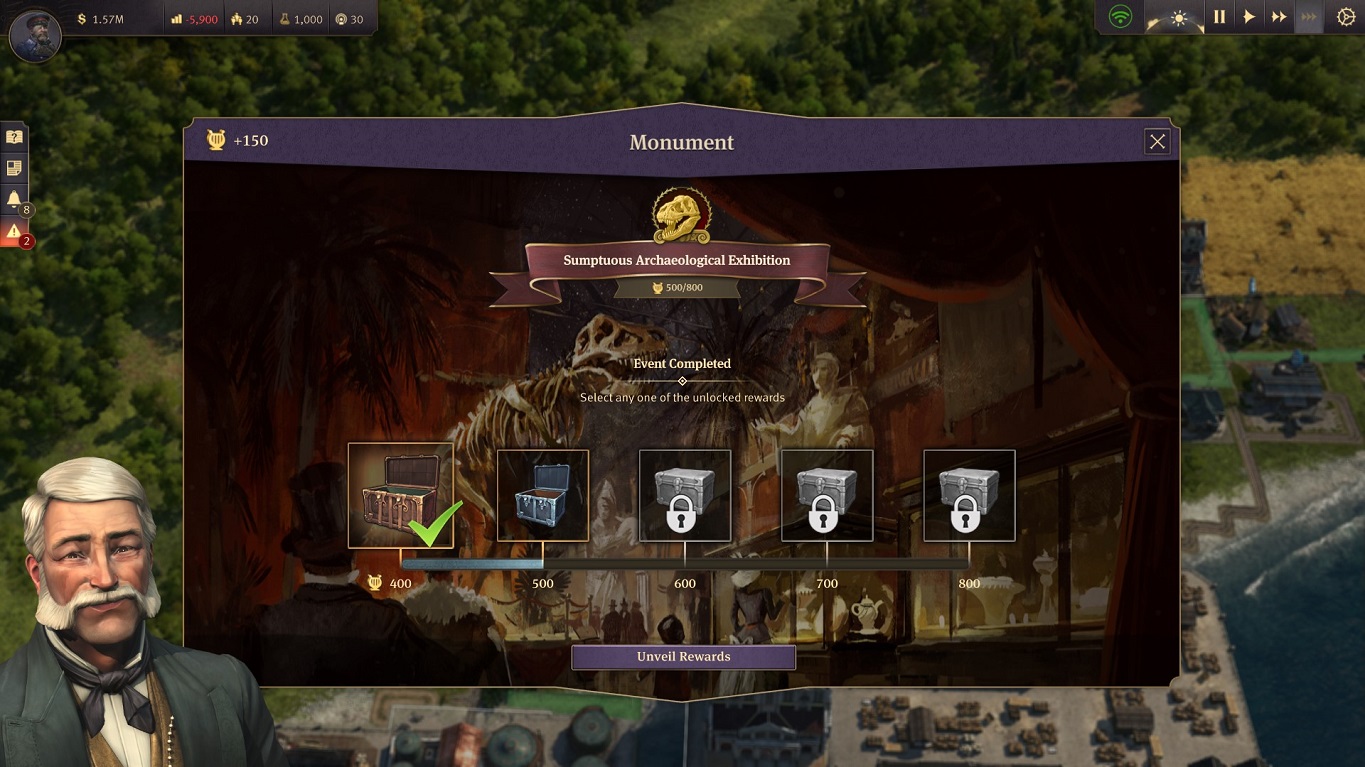 UI improvements give you more control
Another much-requested feature concerns the statistics overview, where you will now be able to select several islands at once to see their combined statistics. Like Windows, this can be done via CTRL + click for single cities, or with Shift + Click for a range of selections. This will give avid users even more control and insight into their empire’s economic output.

We also seen many of you asking for a way to customize what resources and goods are displayed in the top menu bar of the interface while you play the game. Starting with the release of Game Update 9, you can freely customize the five goods displayed in these menu slots at any time, right from the start of a match. You will also be pleased to hear that this selection is separate for each island, making sure you can always keep track of the goods that are the most crucial on that given island.

“Keeping track of” is also an excellent segue to some other improvements. We have not only improved toggling through all ships with the TAB key but have extended that functionality to buildings as well. Simply select any owned building and use the TAB key to cycle through all your owned buildings of the same type (first on one island, before proceeding to the next one within the same session). And should your fire brigade be a bit too slow on the job, you can use the “J” key functionality to cycle through all owned ruined buildings to quickly find any ruins that may need rebuilding (and this one works across sessions as well!). 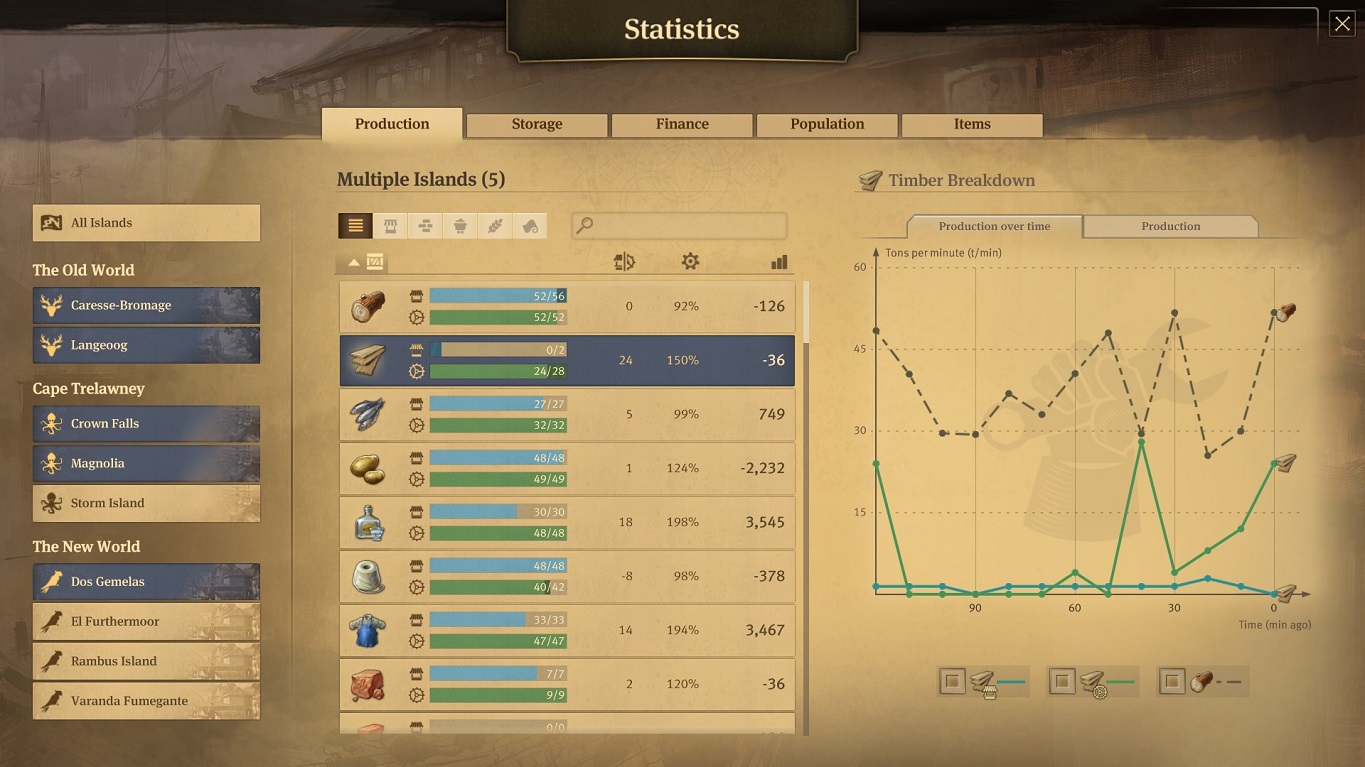 Newspaper and Visitors
You have been asking for it, so here it is- when editing a newspaper to make sure it finds the right words to inspire your loyal citizenry, you can now check a new box that will automatically repeat the same articles going forward. We have also adjusted the timing of the newspaper to be tied to game length, so the newspaper will be triggered less frequently later in the game (when the effect is less impactful, by comparison).

Finally, we have heard your pleas regarding specialist visitors seeking a new home in your empire. Rather than spawning a 3d model at your visitor harbor that you have to manually accept, you will now get a notification pop up of the tourist with an Infotip showing the specialist item you are about to receive. If you do not use the decline button, the visitor will be automatically accepted after some time has passed. If you would rather save some time on this, you can also select the new auto-accept option from the settings menu, which will accept any visitors that want to enter your service. Please note that if you load a save game following the release of Game Update 9, any currently pending specialists will be automatically accepted to clean up any potential backlog you may have.

And there you have it! We think that we picked a good mix of QoL improvements that will make Anno 1800 more fun and frictionless to play, no matter if you are hunting for the next citizen record or are building the industrial tourism wonderland of your dreams. Your mouse will be grateful for the 1.305 average clicks we saved you (note: this is not a scientific number).

Let us know which improvement you are most excited about and keep an eye on the Anno Union as we start unveiling our biggest Anno 1800 DLC, “Land of Lions”, throughout September.
Stay safe,
The Anno Team